Watch the Full Movies From the Application Note

Figure 2: Video captured at 5.8 fps (173 ms per frame), showing clearly the rows of CTAB hemimicelles on the HOPG and the orientation of the domain boundaries. Tapping mode data is shown here for optimum contrast. The video plays back at 23.2 fps (i.e. 4× the acquisition rate).

Figure 3: Video captured at 0.48 fps (250 Hz line rate) showing two CTAB grains of opposite row orientation (upper-left and lower-right) bounded on the left and right by two grains with parallel orientation. Over time, the two grains narrow at their boundary, eventually separating and drifting apart while the adjacent grains on the left and right merge together. Note the three different row orientations, corresponding to the three directions perpendicular to the HOPG symmetry axes. Video is shown at a playback speed of 1.92 frames per second (i.e. 4× the acquisition rate).

Figure 4: Video captured at 0.95 fps (250 Hz line rate) showing the spontaneous formation of a narrow CTAB grain along the boundary of two orientation domains (upper left). The grain continues to grow for about 20 s until a broader grain in the same orientation begins to emerge behind it. This new grain continues to grow and push the smaller grain out of the of view. The video plays back at 3.8 fps (i.e. 4× the acquisition rate).

Figure 5: The video here was acquired at 0.95 fps (250 Hz line rate). Images in the application note highlight two examples, both of which show small features that seem to absorb into surrounding grains. The process appears analogous to Ostwald ripening, except in this two-dimensional system instead of a bulk dispersion. In both cases, the feature appears with higher contrast and appears less structured than the surrounding hemimicelles. The video plays back at 3.8 frames per second (i.e. 4× the acquisition rate). 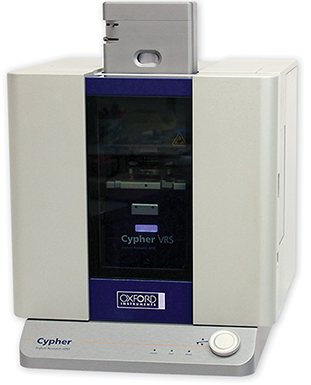 The Cypher VRS is the first and only full-featured video-rate . Finally, researchers can measure nanoscale dynamic processes at video-rate speeds with all of the resolution, versatility, and ease of use that are the hallmarks of an Asylum Research Cypher .